The inauguration of the summer course joined the following personalities: the academic director for Culture, Sports and Social Responsibility Vice Chancellor, Blanca Notario Pacheco; the youth and ICT councillor in Talavera, Daniel Tito Rodríguez; the dean of the Faculty of Social Sciences of Talavera de la Reina, Juana María Serrano García; the aQuantum Team Leader, Guido Peterssen; and Mario Piattini, as a director of the summer course.

The second edition of this course has continued with the spirit of QANSWER 2020 and the Talavera Manifesto, demonstrating that Quantum Software Engineering and Programming is a field in which professionals, researchers and students want to deepen. For this it is essential to have tools such as QPath® that facilitate the work of quantum software engineers and allow agnostic programming. 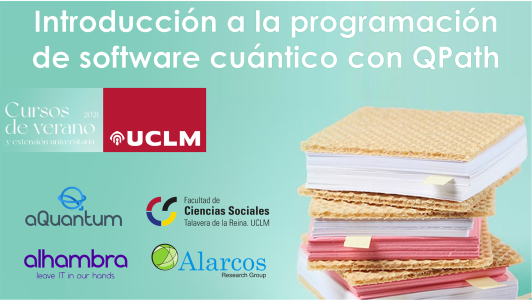 We want to thank the Faculty of Social Sciences of Talavera de la Reina at UCLM for the opportunity given to us and congratulate them for the great success and support that the course has received. With more than 30 attendees, it is an achievement in training associated with such disruptive technologies.

On July 21, the closure of the summer course was solemnly conducted by Santiago Gutiérrez Broncano, Vice-chancellor of postgraduate studies and lifelong learning at UCLM; and Paloma Sánchez Garrido, councillor for Business Economic Promotion.

From aQuantum we want to thank the great public support that has been received for these days, from the Community of Castilla-La Mancha and specially Talavera. The echo of the conference has reached various media.